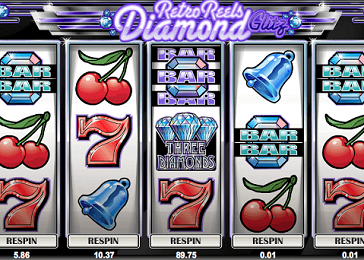 Although it is very similar to the basic Retro Reels slot – it also features five reels set in a traditional fruit machine console – Retro Reels Diamond Glitz is a more glamorous, twinkling version of the title.

Retro Reels Diamond Glitz has taken all those beloved cherries, bells, sevens, stars and bars from its vintage predecessors and added its own sparkle, with all symbols shimmering like polished gem stones. The slots game also features single, triple and double diamond icons, and a dollar sign, which is the most valuable symbol in Retro Reels Diamond Glitz. Whenever a winning combination is landed, the symbols flash brightly, although the game does not feature any modern animations.

The musical accompaniment to this is a simple, jazzy tune with the soft sounding of cymbals and other percussion instruments. Winning combinations are hailed by the familiar chiming sounds of traditional slot machines.

Free Spins with the Scatter Symbols

As with all scatter symbols, Retro Reels Diamond Glitz scatters do not have to appear on an active payline in order to pay out – as long as there are two or more of them anywhere on the reels.

Retro Reels Diamond Glitz also offers the rare online slots re-spin feature. This option allows players to re-spin any one reel at an extra cost. The cost involved will vary, depending on the probability of the reel landing a winning spin – the greater the probability of a winning combination, the higher the cost of a re-spin.

Retro Reels Diamond Glitz players may choose to re-spin after any spin, except in the free spins round. However, the re-spin function can come in quite useful as a way to access free spins when two scatters have already been landed and a re-spin may produce a third.

Diamond symbols are the next most valuable in Retro Reels Diamond Glitz and payouts are made for five of a kind as well as a mixture of the single, double and triple diamond symbols.