Details about A While on the Nile Casino Slot Online 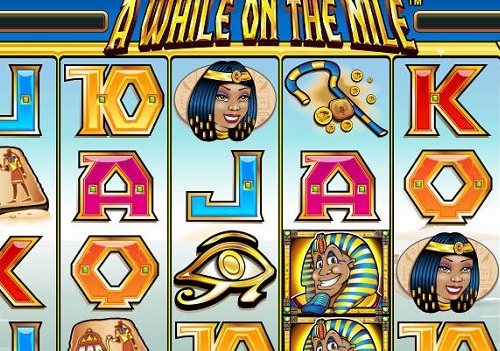 A While on the Nile, a five-reel, 50-payline slot from developer NextGen Gaming, is a lot more light-hearted than many slots themed around ancient Egypt. It uses the familiar luxurious artefacts and bright, rich colours common to most of these titles, but the design itself has a simpler, cartoony feel to it, with no sinister-looking gods and two decidedly zany-looking human characters.

What makes A While on the Nile special is its bonus features. The game has two special symbols apart from the Wild; a Scarab and a gorgeous emerald Jewel. One triggers a bonus game, and the other activates free spins with enhanced prizes. There is also the SuperBet feature, explained below, so A While on the Nile has lots to offer players in terms of rewards.

Although the background music uses Egyptian instruments and melodies, these have been given a salsa shake-up in keeping with A While on the Nile’s tongue-in-cheek treatment of the theme. The gold-framed reels appear between hieroglyphic-bedecked temple pillars, with palms in the background framing the pyramids across the Nile as a felucca sails back and forth.

A While on the Nile uses nine ordinary symbols, with the five low poker values 10 to A rendered as blockish semi-precious stone letters inlaid with jewels. The four high-value symbols are a Pharaoh’s ceremonial reaping hook, a tablet showing the god Anubis whimsically playing a slot machine, a golden Eye of Horus pendant, and a friendly, sexy Cleopatra. She has the top value, scoring 1,000 coins for five of a kind. 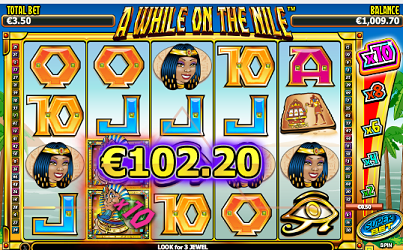 Players can bet either 0.10 or 0.20 per line in the relevant currency, but they can also vary the number of paylines played per spin. To engage A While on the Nile’s SuperBet feature, though, the player must be playing all 50 lines. Then, for an additional bet of between 50X and 300X the line bet per spin, the player can engage one of five SuperBet levels.

At its top setting, the SuperBet enhances any wins including the Wild as a substitute for another symbol by a factor of X10. At its lowest setting, the multiplier is X2. The A While on the Nile Wild is a goofy-looking macho Pharaoh, who only appears on Reels 2, 3, and 4. However, he can appear stacked, covering two, three or all four positions on the reel. Adjacent stacks of Wilds with the top SuperBet engaged can yield enormous wins.

The beautifully jewelled Scarab in flight icon is the first bonus symbol in A While on the Nile, and appears only on Reels 1, 3 and 5. Three in any position will activate the Scarab Bonus Feature. The player is shown a new screen full of Scarabs, and must pick icons to reveal the prizes they offer. When a Scarab reveals the word Collect, the round ends and the total prizes are added to the player’s balance.

The other bonus icon in A While on the Nile is a glittering emerald: the Jewel. It appears only on Reels 2, 3 and 4, but three of a kind triggers an immediate win of 2X the entire bet for the spin, excluding SuperBets. Three Jewels also trigger a bonus feature of 5 free games, during which random ordinary symbols can also become Wild and stack. The free spins can be retriggered, so this round can prove lucrative too.

Tags: A While on the Nile slot, casino games, online slots, pokies