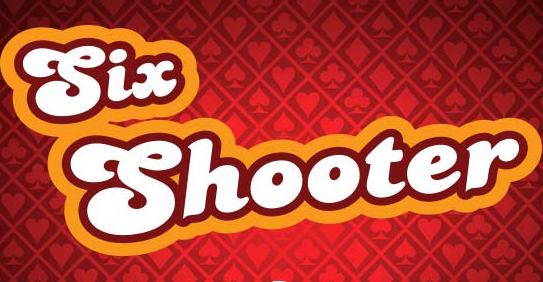 The basic theme of Six Shooter is the life and activities of bank robbers back in the Wild West. In this arcade-style casino game, the main task of players is to get the central character to a final destination point of a Bank Vault, sidestepping an array of different traps and obstacles. The closer they make it to the Vault, the larger players’ payouts will be. The well-produced sound effects and graphics show how much work has gone into the game, and make it more immersive for players.

While it can also be played for free to refine skills, Six Shooter is classified as an Instant Win Game. Players can put down anything from 0.5 to 10 credits, and the highest they can be paid out is 25,000x the original stake if they reach the Bank Vault, and there are no other Bonuses or Jackpots in the game.

The plus and minus buttons are used to set the bet size, and the Turbo mode can be turned on or off to increase or decrease the speed at which the robber moves. The New Game or Roll button is used when players want to start a new game or spin the revolver again, and clicking on the Win button gives them the chance to check their total payout.

Six Shooter is quite interactive, and allows players to make various moves within the 48 sectors of the game’s playing field using their Robber Avatars. There are 8 rounds in every game, and each of these gives Robbers the chance to make between 1 and 6 moves. The specific number allowed in each round is determined by players spinning a revolver cylinder, which carries on the Wild West theme and brings in the 6 shots of the game’s name. There are several potential blocks to the hero’s progress, including runaway trains, hostile natives and a dirty scoundrel waiting near the Bank. At the end of the 8 rounds, the player wins if the Robber has reached the Bank Vault.

The pathway to the prize is made up of blue, red and gold spaces, and players need to navigate these with the number of moves they are assigned. Blue spaces are totally benign and allow players to keep going as long as they have moves left. The Gold spaces signify a prize, and players are given golden coins and a Multiplier if they land on or pass over these. The reward values on the Gold spaces grow as the Robber Avatar approaches the Bank, and once they have been awarded they are guaranteed even if players don’t make it all the way to the Vault.

Payouts in Six Shooter are determined by multiplying the number in the Gold space by the bet. The Red spaces are decorated with the Skulls of Steers, and denote danger areas. If the avatar lands on a Red space at the end of a round, the character dies, the game is over and players are paid out according to the last passed checkpoint.